This is a helpful article about how using a preservative, such as HayPro, can help save you time, and preserve valuable nutrients in hay production.

Most livestock producers can tell you the exact day they will be out of hay.

The current hay situation has put extra emphasis on harvesting as much high-quality hay as possible this hay season.

However, in many parts of the country the spring has been cool and wet, which has delayed spring planting.

Making hay has always competed against other demands on time, yet timing is everything in making quality hay.

The equipment for mowing and conditioning has continued to get bigger and faster, but we need to remember the basic biology of the hay-drying process in order to make better decisions during harvest.

Cutting hay in wide swaths at mowing, adequate conditioning and using a preservative can save time and valuable nutrients in hay production.

Biology of forage drying
The moisture content of forage is around 80 percent when cut. The microbes on the plant will be bacteria, some yeast and fungi which feed on the sugar and organic acids expired from the plant as it dries.

The slower the hay dries, the greater the nutrient loss through prolonged plant respiration and loss of sugars, which are consumed by yeast and fungi growth.

Forage dries in three phases as outlined in Table 1. The length of each phase is impacted by many factors. Phase one can be quite rapid.

The rate of moisture loss in phase two is much slower and dependent on the extent of conditioning.

Phase three is the slowest and most dependent upon weather conditions and forage species.

Phase one is the rapid moisture loss through the stomata of the plant. Stomata are the lungs of the plant and they will remain active until the plant is below 60 percent moisture. Legumes have 10 times the number of stomata compared to grasses.

Stomata are open in the light but closed in the dark. Having a wide swath allows for more of the plants to be exposed to sunlight, resulting in open stomata, whereas a traditional narrow swath will have the majority of the forage in dark conditions with closed stomata.

Plant respiration will continue until the moisture level is below 60 percent. It is critical for phase one to be as short as possible to limit the loss of plant starches and sugars, thus saving more total digestible nutrients.

Phase two is loss of moisture through the surface of the leaves and stems to about 30 percent moisture. Conditioning can greatly speed up this phase by smashing the stems and disrupting the waxy cuticle layer of the stem.

Proper conditioning results in crushing the stem every 2 to 3 inches. Maximizing the surface area exposed will have the greatest impact on drying rate.

We want to manage the microenvironment in the hay swath. Moisture is moving against a gradient. If the air is drier than the plant, moisture will continue to drop in the forage.

A large exposed surface area that allows the hay to warm to air temperature quickly and then warm even more from the sun’s radiant energy will enhance drying rate.

Narrow and dense windrows actually insulate the swath, keeping it cooler and creating a humid environment that limits moisture flow out of the plant. Tedding can speed up this phase, but it must be done at the correct speed and moisture to avoid leaf shatter.

Phase three is often the longest and most frustrating phase of drying. It is dependent on weather and plant characteristics and is at the mercy of temperature, humidity and wind.

Rain is the greatest risk during this phase. Conditioning will have some impact on the rate of drying, especially for thick-stemmed grasses.

Hay may require an additional two or three days to get to 15 to 20 percent moisture levels where baling can proceed.

Swath width
As indicated in Table 1, swath width is the single-most important factor in drying rate and retention of nutrients in hay.

The swath should be at least 65 to 70 percent of the cutter bar length. The sickle bar mower is old technology but was ahead of its time from a hay-drying standpoint. A wide swath can reduce the needed drying time by more than a day.

University of Wisconsin data has shown a dramatic difference in drying rates of wide swath versus narrow swath.

Figure 1 shows the difference in drying times between wide swath and narrow swaths in a study conducted at the University of Wisconsin Arlington Research Center. 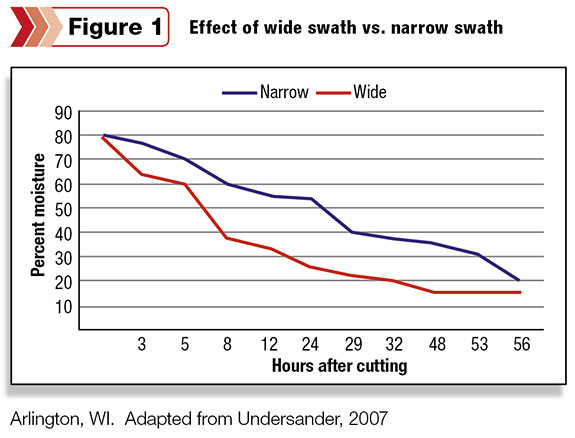 The hay in wide swaths reached 35 percent moisture and could be chopped for haylage within 12 hours.

The wide swath hay had 20 percent moisture 24 hours sooner than the narrow swath.

Bale heating and nutrient loss
There is a direct correlation between moisture content and the extent bales heat.

The size of the bale will impact the extent of heating, mainly due to the duration of heating. All hay will heat some after baling due to natural plant reactions.

Often there will be a second temperature spike due to microbial growth. Yeast and mold growth are the cause of heat production.

They consume plant sugars and starch as they grow. Heating in hay is measured in heating degree days (HDD), which takes the temperature and duration above 86°F into account.

Larger bales can have higher HDD due to higher maximum temperatures and more days above 86°F. Larger bales, due to their mass and density, do not dissipate heat as quickly as small 50-pound to 100-pound bales.

In the past, the loss of protein content has been the main concern with heat-damaged hay, and the amount of energy lost has largely been ignored.

The process includes multiple nutrients, multiplying each nutrient by a digestion coefficient and then adds the totals together to obtain a TDN value. Research in 2009 examined the loss of TDN due to spontaneous heating in hay.

Changes in both the quantity and digestibility of the non-fiber carbohydrate (NFC), nutrient-detergent fiber (NDF) and crude protein were significant for hay that had minor heat damage starting at 600 HDD.

Maximal nutrient loss has occurred by 1000 HDD. Contributing to the energy loss was a 25 percent reduction in NFC content in heat-damaged hay.

The digestibility coefficient of crude protein in heated hay was reduced from 94 percent to 76 percent. NDF digestibility is associated with lignin content where higher lignin results in lower digestibility.

The need for preservatives
Often impending weather and demands on available equipment do not allow waiting for ideal moisture conditions to bale. We can bale high-quality hay if at 15 to 25 percent moisture, or we can wait and risk the hay getting rained on.

Preservatives allow us to safely bale at higher moistures. The larger-sized bales will require some preservative treatment to prevent excessive heating when baling at moisture over 15 percent.

The most common hay preservatives are based on organic acids such as propionic and acetic acids. The mode of action is inhibition of fungal growth through direct contact with the microbes, which makes proper application so critical.

Application rates start at 6 to 8 pounds per ton and up to 12 to 14 pounds at the high-moisture levels. Some preservatives are based on the oxygen scavenging and antifungal properties of sulfur compounds and are applied at a lower rate due to this unique mode of action.

When time is limited or large bales are made, then using a preservative is a must to harvest the highest quality possible.

As stated earlier, timing is everything in making quality hay. If we examine the biology of the hay-drying process, the benefit of mowing hay in a wide swath and using a preservative is evident.

The faster the drying process, the more nutrients are retained and eventually fed to our livestock. We cannot control the weather, but we do have tools and techniques that can help if we need to bale before the hay is ready to go.  FG